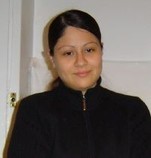 A Mending Angel was there for me and my children at a critical time in our lives. Thank You!

Shortly before Thanksgiving, Christina Valesquez’s world was changed forever.  Manuel Quintanilla, her longtime boyfriend and father of her two children, Cynthia, age 5, and Angel, age 1, was tragically killed in a hit-and-run while returning from his late night work shift. Manuel was only 27 years old. Manuel lived on the gang-infested Outer Mission District neighborhood of San Francisco – where a young Latino can be killed merely for wearing the wrong colors. Manuel and Christina both wanted the best for their children, so they enrolled Cynthia in a private elementary school far away from the violence and chaos of the Mission. Paying for Cynthia’s tuition was always a constant struggle, and this was made almost impossible by her dad’s tragic death.

A Mending Angel came forward to help. We talked to the principal of Cynthia’s school and discussed the situation. Everyone involved agreed that Cynthia loves her school, her teacher, and classmates. It was critical that she stay in her school. A Mending Angel provided critical tuition assistance so that Cynthia could do just that – remain in her school, and thereby continue to fulfill the dream of both her loving parents.

If A Mending Angel had not come forward and helped Cynthia remain in her school, she would have been compelled to attend a public school in a dangerous city - not knowing anyone, feeling even more alone with the loss of her dad. This new school may have
perhaps been an even more violent and hostile setting than in the Outer Mission in San Francisco, where her dad was killed. 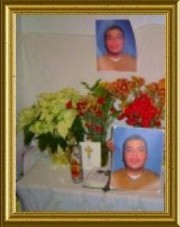 Christina and Cynthia (and baby Angel) are doing better now, with the help of a safe, and nurturing environment – far away from the numerous dangers of the inner city. After A Mending Angel's emergency support, Cynthia's school has also helped the family by providing financial aid for the remainder of the school year. The effects of the tragedy will take time to heal, but the stability of being able to remain in a friendly and secure school and home setting has helped eased the pain. A Mending Angel is glad to be playing a part in the family's road to recovery.﻿ 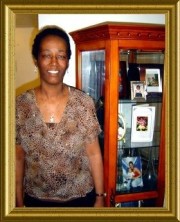 One of our first Mended Angels, Edrina Gibson-McEntire’s story is a perfect illustration about overcoming tremendous obstacles – and why A Mending Angel exists.

Edrina Gibson McEntire’s world nearly fell apart this past year. Her doctor told Edrina, age 39 and a mother of 3 children, that she had a rare form of lymphoma and was dying. Doctors gave her 6 months to live. Then, something else even more unimaginable happened: Her 18 month-old baby boy, CJ, was stabbed to death – allegedly by Edrina’s own husband. Edrina and her teenage daughter not only had to endure this tragedy and the trauma of Edrina’s advanced medical condition, but they also had to do this in the same place this horrific tragedy occurred. Unable to work herself because of her lymphoma, and receiving no income from her husband (now in custody), Edrina could not afford to move out of her apartment in Richmond, California where CJ was murdered. A Mending Angel provided Edrina with an emergency rent assistance grant so that she was able to move out to a more stable living environment – for herself and for her daughter.

For Mother’s Day, Tom King, the President and Founder of A Mending Angel, brought a newborn kitten to Edrina and her 13 year old daughter Rayshanna, as a personal gift of support. A Mending Angel is very proud of Edrina’s quick recovery from the many tragedies which occurred in her life this past year. Edrina has enrolled in school –working hard towards her goal of starting her own massage therapy business. As Edrina says, "I feel like this life has provided me with so much blessings, I want to pass this on to others who might need my help." Edrina has also offered to volunteer for A Mending Angel in any crisis management issues, even offering her phone number to those in critical need for guidance and much-needed support. 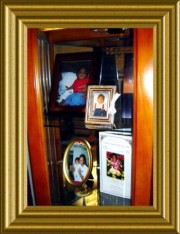 Edrina is truly a very special person and mother, and A Mending Angel is so proud of her recent accomplishments in overcoming her many tragedies. Edrina is succeeding in life now - a new home, a new school and career, and a new and much more hopeful outlook on life.﻿﻿

A Mending Angel is the first and only nonprofit to provide grant scholarships to deserving, low income high school students to enable them to take a SAT college prep course to improve their score on the critical SAT. You may know that the SAT recently made significant changes to the test, including adding a personal essay section, so now is the perfect time to begin our SAT Project. A Mending Angel just recently initiated our SAT Project, so here is a letter we received from one very deserving young man who was selected to receive a grant: Dear A Mending Angel:

Thank you for the opportunity that you have given me to take an SAT prep course which will help me achieve my goals in life. I am sure this course will teach me valuable skills that will enable me to do well on the SAT.

The outside of the card he sent had the following inscription:  "How beautiful a day can be when kindness touches it."

There are so many deserving young people out there who can benefit from our SAT Project. We are extremely excited about its potential to change so many lives. The SAT remains the single most important test a high school student takes. As such, A Mending Angel believes that ALL deserving and motivated students should have the opportunity to take this crucial prep course which will increase their chances to succeed in college, and in life.

This is  what A Mending Angel is all about: helping people and enabling them to change their lives. Their success is our future; their future our success. Please support us so that we can positively change as many lives as possible. Thank you.﻿

The only charity to ever

offer its donors a

A Charity that Works